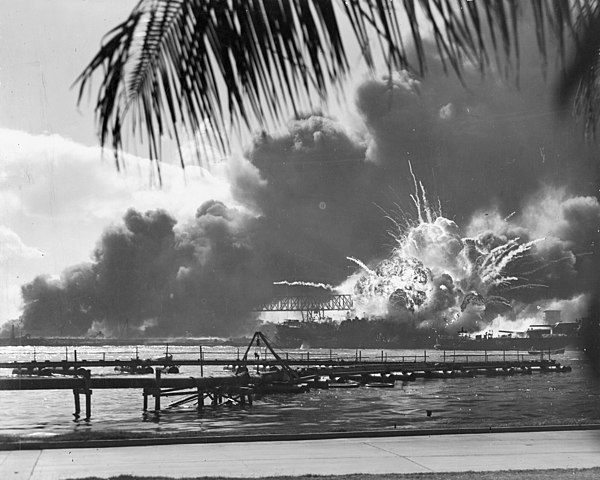 December 7, 1941, marks a grim day in United States history. Minutes before 8:00 AM on that fateful Sunday morning, a horrific attack was launched on Pearl Harbor. President Franklin Delano Roosevelt declared war on Japan the next day, and the United States officially entered World War 2.

Front pages were crammed with news of the attack. Retrace history as you immerse yourself in newspapers that provide comprehensive accounts of Pearl Harbor.

The Lawrence-Journal World was one of many newspapers highlighting local soldiers stationed in Hawaii with articles like “Many Men from Here in the Pacific.” It showcased short blurbs about the men serving.

An eyewitness account provided a unique perspective for readers of the Reno Evening Gazette in “Writer Tells Story of Attack on Hawaii” with vivid storytelling like “the sky was filled with puffs of smoke from exploding shells” and “the sound of cannonading coming from the direction of Pearl Harbor has been continuing for an hour and a half.”

In addition to multiple articles revolving around the attack, newspapers also included graphics such as the Hutchinson Herald’s front page map, which illustrated the grand strategy of the war in the Pacific.

News of the attack prompted President FDR to hold an “extraordinary” meeting. The Lowell Sun published “President Calls Cabinet for 8.30 Session Tonight” in order to gather facts and information to report to Congress in the “form of a message.”

Many local newspapers like the Murphysboro Daily Independent published “War Bulletins” as a regular part of their coverage that spotlighted recent war events.

The Daily Hawk-Eye Gazette featured an article, “Draft Quotas to Be Larger,” that quoted Lewis B. Hersey, National Selective Service Director, saying every state’s draft quotas would be increased “effective immediately.” This edition of the Hawk-Eye also included a spread of pictures that captured the essence of the day.

An illustration depicting the island of Oahu graced the front page of the Armadillo Daily News, along with a piece that focused on famous military general Douglas McArthur in “McArthur Directs US Course in Philippines.”

Want to read more about Pearl Harbor? Newspapers make a fascinating way to travel back in time and “see” a historic moment through the words and images captured by journalists of the day. Visit NewspaperArchive.com today for a 7-Day Free Trial and relive history.